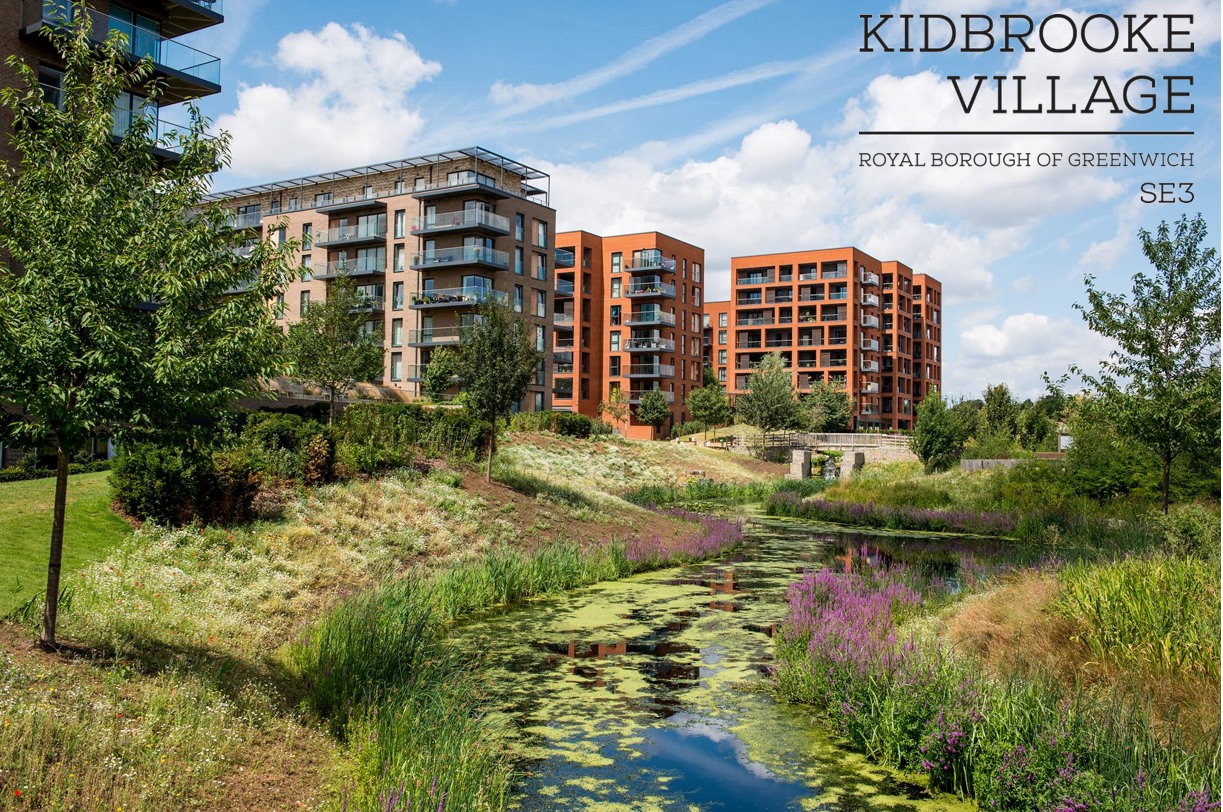 Kidbrooke Village is located in one of London’s most popular locations, the Royal Borough of Greenwich and comprises of four distinct neighbourhoods, integrated seamlessly into one community. These include: The Village Centre (Birch House, Centrum Court and Agora Court), Meridian Gate, Blackheath Quarter and City Point.

During the World War Two, the site was a base for RAF and was used for making barrage balloons against  low-flying aeroplanes. During the Cold War, the location was at the centre of counter-intelligence. The infamous Ferrier Estate was built on the site later, which lasted until the 1980s. Berkeley took over the site in 2009 with a master plan to deliver 4,800 new homes, shops and leisure facilities. The site incorporates two splendid new parks: Cator Park and Sutcliffe Park.

Kidbrooke Village enjoys all the benefits of this culturally rich area, including the beautiful Greenwich Park, the Royal Observatory and Maritime Greenwich. Greenwich is a lively hub with something for everyone. In addition to the popular Greenwich Market there are high street brands and independent boutiques too. All tastes and budgets are catered for by a fine selection of restaurants and pubs, many of which are housed in historic buildings often with park or river views.

Keeping fit and healthy is all part of the sustainable lifestyle offered at Kidbrooke Village. You can take on any outdoor sport in the park or you can keep in shape in the residents only gym located in the Village Centre. The centre also has its own 24-hour concierge, situated within the retail hub.

The recently completed 2.7 acre playground Is a fine example of a sustainable and environmentally friendly designed play space. The designer of this adventure park for children is John O’Discoll who used renewable or reclaimed material such as natural wood : ‘ spruce in telegraph poles, green hart (recovered from the pilings of Woolwich pier) in seats and benches, and lofty, hexagonal-shaped towers, with enclosed rope walkways, topped with a jumble of stag horn oak that’s hand-collected from an Oxfordshire forest before being polished and oiled’.

Once a deserted brownfield site, Kidbrooke Village has been transformed with dozens of acres of ponds, wetlands, parks planted with trees and carpeted with wildflowers.

Convenient public transport is an important part of the sustainability for Kidbrooke. Trains leave from Kidbrooke station for London Bridge, Waterloo East, Charing Cross and Victoria, connecting with the London Underground at these mainline stations. Trains also run to Lewisham providing links via DLR to Greenwich, Canary Wharf and Stratford. A regular bus service provides connections for onward travels across London and there are safe pedestrian and cycle routes running through and from Kidbrooke Village.

City Point was the first phase launched at Kidbrooke Village, setting the standard with a range of contemporary apartments next to Sutcliffe Park, the established Green Flag nature reserve. This was followed by Blackheath Quarter, expanding choices with family homes and apartments overlooking the newly created Cator Park. Meridian Gate was the next neighbourhood to be added to the village, comprising stylish apartments and houses centrally located between Sutcliffe Park and Cator Park.

Kidbrooke Village Centre is where everyone gravitates to for convenient shopping and other local facilities. Onsite amenities include a supermarket, coffee shop, dentist, doctor, and a pharmacy. More shops, restaurants, leisure facilities and the piazza will be delivered over the coming years.

If easy access to green open spaces is on your agenda, then Kidbrooke Village is a place where you will flourish. In total, the village has 136 acres of open space, made up from the established Sutcliffe Park, the newly created Cator Park, and numerous green spots and green links between the buildings. Cator Park features stunning landscaping and water features, forming a green river running through the village. It leads to the long established Sutcliffe Park, which has the prestigious Green Flag award and is a noted local nature reserve.

With an abundance of carefully managed open spaces and several schools nearby, Kidbrooke Village is ideal for family life. Wingfield Primary School is situated in Blackheath Quarter, and Thomas Tallis secondary school and Arts College has recently moved into a splendid state-of-the art building on the borders of the village. The University of Greenwich can be reached in approx. 13 minutes by car.

Just around the corner from Kidbrooke Village is Blackheath. The heath itself is a wonderful place for walking, being one of the largest areas of open land in London. It supports many species of rare plants and wildlife and from its highest point you can see the towers of Canary Wharf in the distance.

A wealth of attractive independent shops, including a bookseller, fishmonger, greengrocer, butcher, baker and wine merchant can be found at Blackheath. Many great restaurants including Argentinian, modern British, Indian, Portuguese and Thai are just some of the cuisines on offer.

A short ride by DLR, the 97 acre development of Canary Wharf has a vibrant and cosmopolitan feel, with some 300 restaurants, bars and shops and a packed arts and entertainment programme. Old-fashioned pubs and sophisticated restaurants serve cuisines from all around the world. Shopping is in abundance with a mix of high-end brands such as Michael Kors and Bobbi Brown, and high street favourites such as Marks & Spencer and TM Lewin, plus there’s a Waitrose for day-to-day essentials.